DisAtBot - How I Built a Chatbot With Telegram And Python 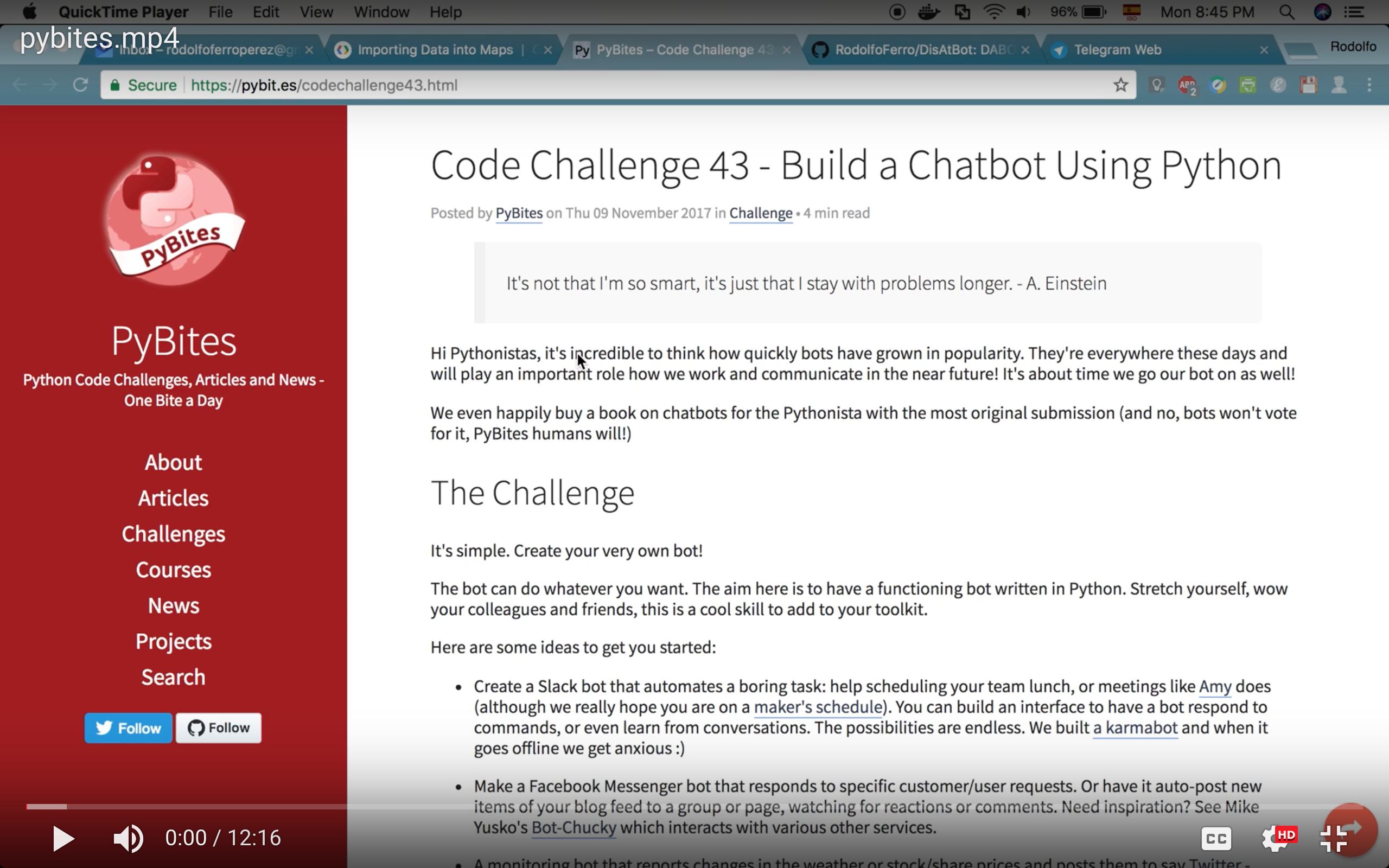 Rodolfo recently joined our Code Challenges and built Disaster Attention Bot (DisAtBot), a chatbot that helps people affected by natural disasters. In this article he shows how he built this bot with Telegram and (of course) Python. Show him some love because who knows, this could be a life saver (pun intended)! We are delighted to have him show this interesting project he submitted for Code Challenge 43 which earned him a book on chatbots. /Rod please share …

A bit of context…

Since September 19th, 2017 Mexico has been hit by several earthquakes (The Guardian, CNN). This made me wonder how we could better handle the reporting of damaged zones, people buried under the rubble of buildings, injured people in need of medical attention and other situations.

Verificado 19s was an immediate solution to follow up reports from social media and visualize the info on an online map. This required a lot of real-time (24/7) monitoring of posts on social media from people that were located in the affected areas. And that data was updated every ~10 minutes.

So I started thinking about a way to optimize this process for future situations, not only for earthquakes, but for disaster situations in general. This incentivized me to work on this bot for Pybites Code Challenge 43 - Build a Chatbot Using Python.

DisAtBot automates the process of reporting incidents via messaging platforms, such as Telegram, Facebook Messenger, Twitter, etc. At this time it only supports Telegram, but I hope to expand it to other social media. If you’d like to contribute, see the Contribute section at the end.

You can find DisAtBot at:

The idea was to have a simple flow that allowed disaster reporting to be quick and easy. The general process of DisAtBot is as follows: 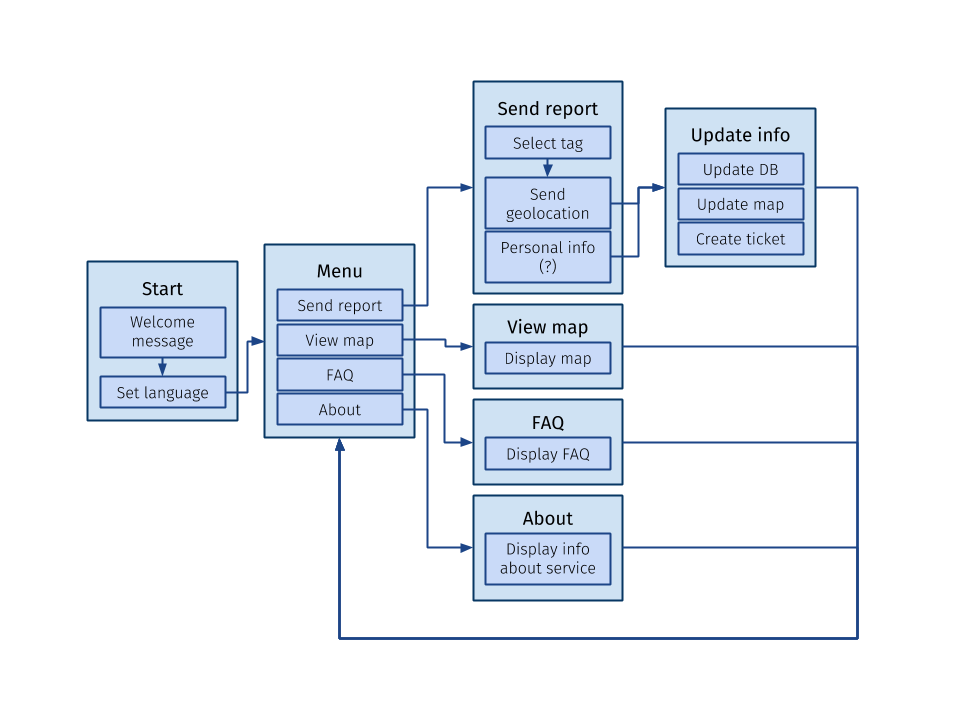 The idea is that any user can interact with the bot by selecting options from button menus in the conversation. This greatly speeds up incidents reporting.

The next step would be opening a ticket which will be stored in a database, for the corresponding government instance/public organization/NGO/etc. to validate and send assistance. When no more help is needed, or the situation is under control, the ticket is closed.

First clone the repo. I used Python 3.6 and the following packages:

To install all dependencies create a virtual env and run:

Then cd into the scripts folder and run the bot as follows:

The focus of the initial version was the creation of menu buttons for an easy interaction with the user. The second –and main– issue addressed was the conversation handler. A finite state machine was needed to preserve the desired flow and the responses for each state.

I won’t go too deep into the explanation, but the code below will show how I tackled this.

An example can be seen in the menu function:

As you can see, the keyboard variable is a list that contains the four buttons to be displayed. The layout can be set by nesting lists inside. In this case the Report and Map buttons are in the first row, while FAQ and About buttons are in the second row. This looks like: 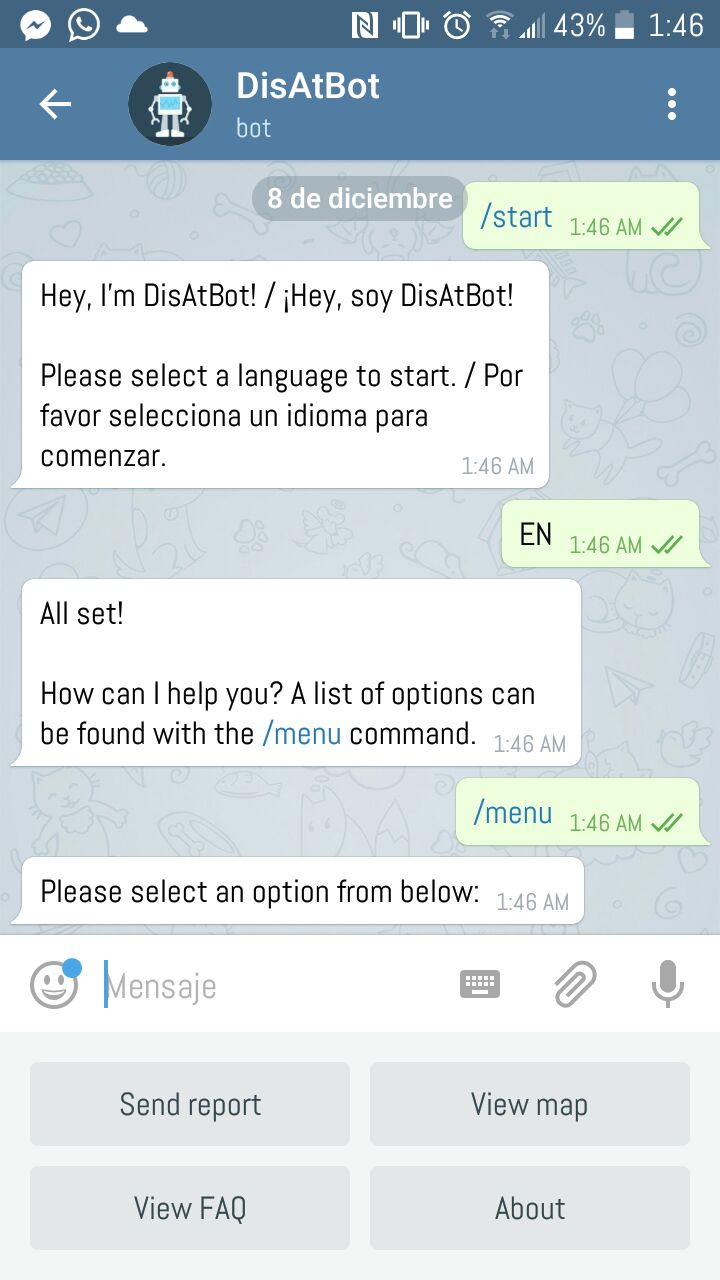 Continuing with the code, a ReplyMarkup is needed to handle the button responses. It specifies the layout of the menu: if only one menu is displayed, if it needs to be resized, etc.

A logger is used for the bot, and the update.message.reply(...) function is used to update the displayed text according to the response from the user. The SET_STAT variable returned in this function is a (predefined) integer to return the state at that time, and to follow the flow.

We now understand the menu creation and handling. The reason of using buttons is that we want a quick interaction because the bot is used in an emergency situation.

The conversation handler - Telegram’s ConversationHandler - takes care of setting the state or step of the flow we’re currently at, the finite state machine I mentioned earlier. Note that each state also needs to handle its respective information (button responses, etc.)

This code shows the conversation handler:

It might seem a bit confusing at first, but it boils down to:

If you want to check the full code of this bot, check out the scripts directory where you’ll find the main script and the language dictionaries.

Some other features implemented are geolocation handling and About / FAQ sections. But the best way to know about this project is by watching it in action (for a live demo go to 8:30):

For future development I am thinking about adding a map. The system already creates a GeoJSON file from the locations acquired.

As mentioned I am considering expanding this to other platforms like Facebook Messenger and Twitter. Another good thing to add would be a website explaining the main use cases of the bot, maybe a wiki –kinda– site?

If you have any other ideas or suggestions feel free to contact me or:

If you’re interested in contributing to this project, feel free to take a look at the repo’s CONTRIBUTING file. I’d be very pleased if this project would grow out to something used in real life to alleviate the dramatic consequences of natural disaster, which always seem to hit when least expected.